When history meets the future: a 1950s-era building has a plumbing upgrade from the inside out

One of the country’s most prestigious veterinary animal care facilities charts a path to modern plumbing—a challenge not unlike converting to low-temperature hot water systems. And all without missing a beat of regular operations. Here’s how they did it. 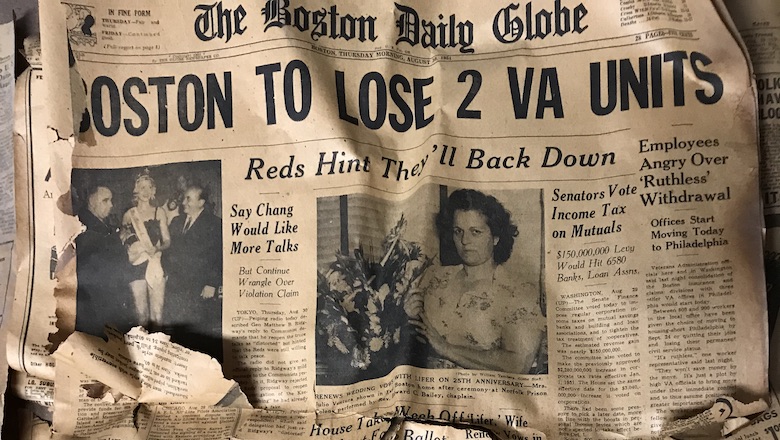 The year is 1951. World War II ended six years ago. The Korean War was in its second year. The New York Giants win the National League pennant in the “Shot Heard ‘Round the World.” The cost of a gallon of gas is 19 cents.

America was having a good year—a good decade, really. A post-war nation-wide economic boom meant growth, in babies, job creation, and new construction. It was in 1951—the year that the first NBA all-star game was held at Boston Garden—that a new building was constructed in Jamaica Plain’s Hyde Square, on the former location of the Perkins School’s Kindergarten for the Blind, to house residents of the Cardinal O’Connell Seminary.

As building construction reached completion, the walls were closed in, and the majority of the building’s plumbing—its heart and veins—last saw the light of day, sealed away to do their job, out of sight and mind, for the next 70 years.

The seminary fairly quickly changed locations in the 1960s, and ultimately merged with St. John’s Seminary in 1968. Fast forward to 1976, when the Massachusetts Society for the Prevention of Cruelty to Animals expanded and moved into the former seminary, continuing to make history as one of the oldest, largest, and most ambitious animal care facilities in the country.

The MSPCA faced a number of challenges to adapt the site for world-class cutting-edge animal veterinary care. Aging construction has its own challenges (watch our video on a deep energy retrofit at the MSPCA’s Jamaica Plain location). The original space was intended as a dormitory for high-school boys, with sinks in every room. That’s nice for frequent hand-washing. It’s not quite as nice for building managers to keep up with an aging plumbing system 70 years later, when the plumbing system had begun to disintegrate and leaks were springing with greater frequency.

Let’s digress for a moment here.

Steam-heating systems—where a boiler pushes steam through cranky old radiators—are among the oldest and least efficient methods to heat a space. At 85% average efficiency, steam systems are still slowly being phased out in favor of low-temperature hot water systems.

The math is fairly simple: where steam systems require high-temperature hot water of up to 450°F and 250 psi of pressure to push heat through a radiator system, modern low-temperature hot water (LTHW) systems are heated to under 250°F—ideally 140°F or less. Furthermore, LTHW can be coupled with ground source heat pumps (geothermal), which the Washington Post recently cited as among the most earth-friendly energy sources. In navigating the path to climate-neutral operations, LTHW and heat pumps are among the smartest moves you can make.

But one of the challenges of making the switch to LTHW is converting the building’s piping system to accommodate a newer system. And in older buildings, this poses one of the greatest hurdles to making the switch—because opening up walls and upgrading all the piping is disruptive and expensive, to put it mildly.

Fortunately, there is a creative solution, which GreenerU has been implementing at MSPCA Angell over the course of the past two years.

Every time a pipe sprung a leak at the MSPCA, a maintenance worker would have to open up a wall and fix the 70-year-old plumbing. Over and over this would happen until it became clear that this was another case of facilities Whac-a-Mole, an exercise in futility. A permanent solution was needed, and that meant replacing all the existing plumbing.

But interrupting the existing plumbing system in an occupied building, particularly one with specialized activities such as veterinary and emergency animal care, would not only have been highly disruptive in this space; budgetarily, it would have been a no-go.

The solution, one that would overcome both the practical and financial hurdles, came in consultation with MSPCA’s team: a phased approach. GreenerU essentially performed a gradual “heart transplant,” starting in the middle of the building, that involved installing all new piping and transferring the old system to the new one bit by bit. This way, the MSPCA could also stretch out replacement costs at a more palatable pace. And, as Director of Operations Jody Renouf says, “we didn’t have to worry about flooding because the new systems were installed completely separately from the existing system.”

GreenerU also avoided operational disruptions in particularly sensitive spaces such as a “clean room” and operating clinical laboratories by working on those parts of the project during the night. In locations where institutional mission-based activities can’t be temporarily performed somewhere else, this coordination and attention to the organization’s needs is particularly crucial.

One fun find from opening up walls at the MSPCA was a Boston Daily Globe newspaper copy dated August 30, 1951. In it there are advertisements for the Bentley College of Accounting, Northeastern University School of Law (for men and women), tensions with the Soviet Union, and a whole lot of anticipation for the upcoming Labor Day weekend. Perhaps a construction worker was sneaking a break when he was startled back to work, leaving the paper behind? 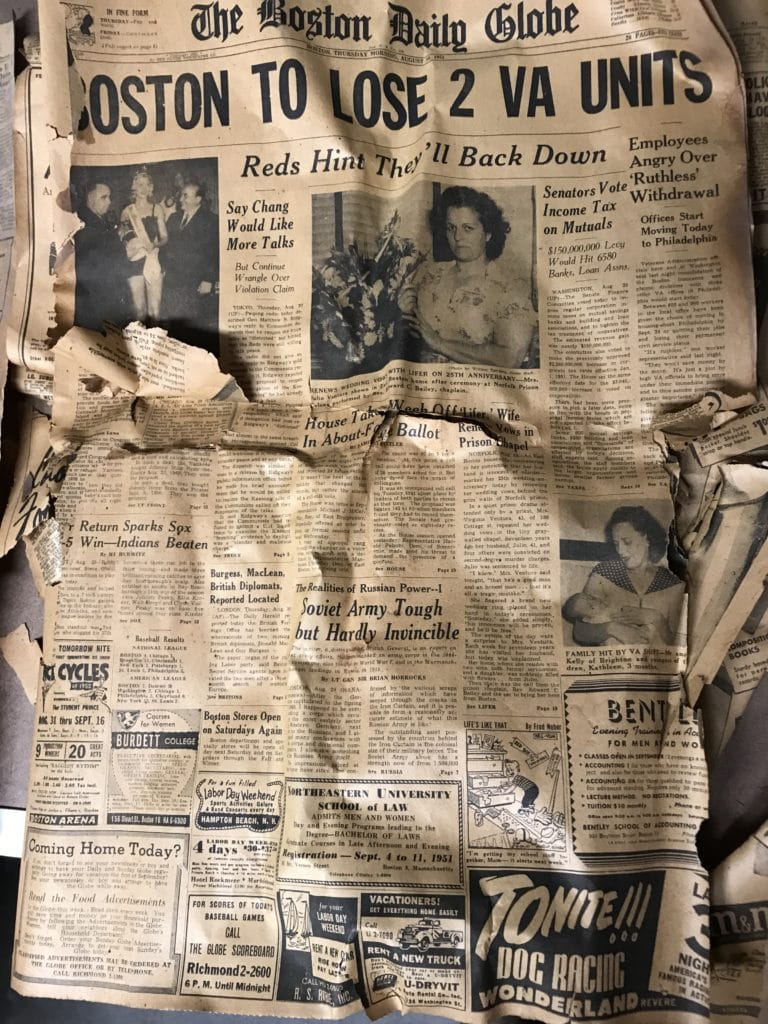 Time capsule: a 1951 copy of the Boston Daily Globe was discovered inside a wall at the MSPCA

Some parts of the 1950s were great times in American history. And some buildings have survived the decades with grace. Seventy years on, the MSPCA has breathed new life into an old space with new windows, air source heat pumps, LED lighting, and a whole new plumbing system—all while proving that you can still operate a world-class veterinary and laboratory facility throughout the entire process.

Energy-efficient low-temperature hot water systems and ground source heat pumps are here, and the future of clean energy and the climate depend on their adoption. GreenerU manages these complex installations by listening and coordinating with your team to ensure the smoothest and least disruptive path to completion. Contact us to talk about your energy needs.