During Scene 2 of “Monty Python and the Holy Grail” (1975), a plague has beset a village. “Bring out your dead,” calls out a man pushing a cart of corpses. The man slung over John Cleese’s right shoulder insists “I’m not dead!”

It turns out that neither is the electric car. The basic technology dates back 150 years, or even longer, depending on what you characterize as an electric vehicle. For short trips around the city, the electric car was popular in the early 20th century—that is, until the mass-produced, gas-powered Ford Model T made automobiles affordable to all economic classes at just a third of the cost of electric vehicles. The democratization of the gas-powered vehicle made driving for pleasure and long-distance travel accessible to just about anyone. Battery technology just hadn’t kept pace.

Interestingly, the earliest known uses of Alessandro Volta’s invention were actually for transportation purposes: Gaston Planté used batteries to power lights inside train carriages. But it took quite some time before batteries could store enough energy to power a vehicle to go distances. They can now—and the technology is still advancing.

In fact, the growing prevalence of electric vehicles in the last decade-plus and batteries’ collective storage capacity brings about exciting possibilities for the dynamics of the electric grid at large, including vehicle-to-grid (V2G) and even vehicle-to-everything (V2X) charging. This means you could basically jerry rig your truck battery to power your home electricity needs during peak demand (expensive) hours and recharge your truck during low-demand (cheaper) hours.

The electric vehicle is back, baby, and it’s hot. Aside from sleek Tesla models and a slew of other passenger electric vehicles on the market these days, institutional fleet vehicles are also making the transition to electric:

They’re not dead—they’re getting better. 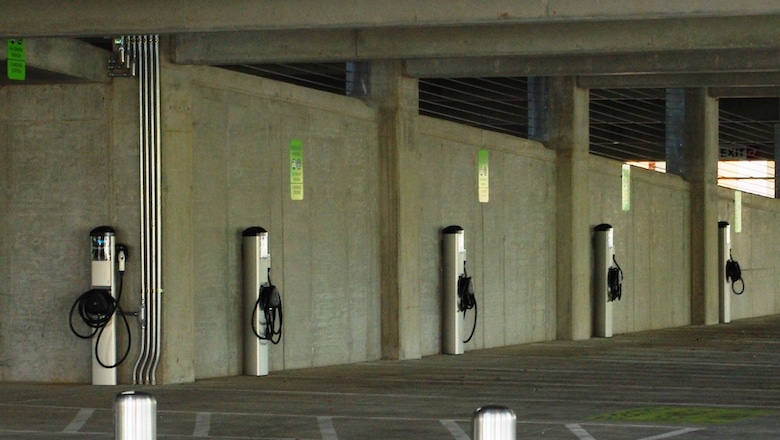 The future is electric: planning ahead when installing EV charging stations

With the transportation sector contributing to 29% of total emissions in the U.S., alternatives to fossil-fueled vehicles are a critical component of mitigating climate change. Preparing your facilities for an EV future takes additional planning—and we’re here to help you think it through.