Brandeis gains momentum on finding a path toward climate neutrality through lighting, boilers, and smart financing

“We are now doing capital planning more intentionally than ever, and sustainability has become a default factor in those projects.” —Mary Fischer, manager of sustainability programs 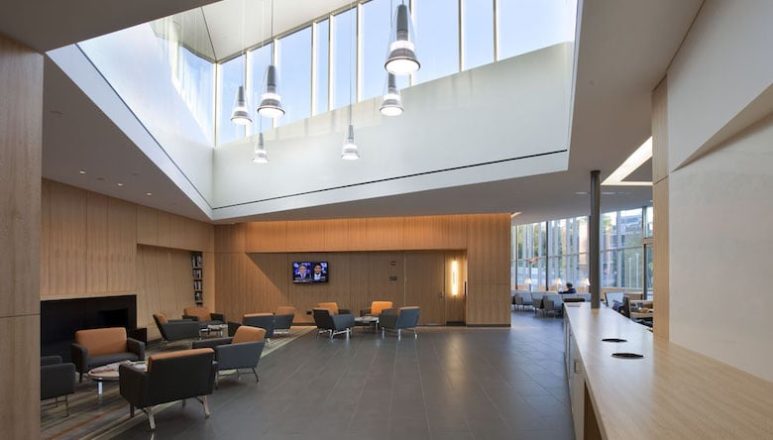 A cool thing happened with a hot boiler project recently.

At Brandeis University’s campus in Waltham, Mass., a 1971 boiler that served Brandeis well until its dying day was removed in October 2020 to make way for more environmentally friendly equipment. The new Cleaver-Brooks firetube boiler, with a gas-side economizer, consumes 64% less fuel than its predecessor even when working at its maximum firing rate—a huge win in reducing Brandeis’s demands for fossil fuel and a major foot forward in reducing their overall carbon footprint.

This in and of itself is, of course, very cool. But even cooler has been what Brandeis has chosen to do with the incentives they received from National Grid.

The National Grid rebate will, beginning in 2021, kick off a pilot funding strategy for improving campus energy efficiency. The new strategy will aim to use utility incentives primarily for energy-efficiency projects on campus, many of which also address deferred maintenance.

One of the first projects to be funded in part through rebates will be to perform recommissioning of the Shapiro Science Center with conservation measures that have a payback time frame of less than a year. Brandeis hopes this pilot strategy will continue and eventually formalize into an energy reinvestment fund, gradually growing Brandeis’s pot of available funds to perform even more energy-saving measures while maintaining current budgets, all of which allow for cost savings from lower utility bills to go toward even more energy-saving projects—a virtuous cycle.

Sustainability and energy efficiency have been gaining momentum at Brandeis since the school published its first climate action plan in 2009, starting with becoming a signatory to Second Nature’s carbon commitment, and since updated the plan twice. In its second iteration, Brandeis committed to a 15% decrease in greenhouse gas emissions by 2020 against a 2015 baseline—a commitment that led to a number of energy-reduction projects, including a series of building lighting retrofits.

These high-quality retrofits are not only providing Brandeis’s students more comfortable places to work and study; they are enabling the school to save almost $113,700 in annual electricity bills and 473 metric tons of carbon equivalent. That’s like saying Brandeis is diverting 53,000 gallons of gasoline from being burned each year—just from retrofitting these two buildings with LED lighting.

Next on the docket was The Village residence halls, which underwent similar lighting upgrades. More recently, Linsey Pool, the Heller School for Social Policy and Management, and the Bernstein-Marcus Administration Center were tapped for lighting overhauls. Altogether GreenerU’s lighting work with Brandeis will garner almost $370,000 in utility incentives and save the school an estimated annual $195,000 in electricity costs.

“This approach to lighting retrofits gets us on an affordable path to achieving carbon reduction,” said Jim McCormack, CEM, senior project manager of Capital Projects at Brandeis. “We are seeing the benefits on multiple fronts.”

The bigger picture: what’s next for Brandeis

While its accomplishments of late have been significant, Brandeis is just getting started. Just last year, Brandeis President Ron Liebowitz’s Task Force on Campus Sustainability drafted a new climate action plan—currently under review—which is cited as the “most ambitious plan since Brandeis became a signatory to the 2008 Carbon Commitment.”

In addition to prioritizing resilience planning, the school established a formal Sustainability Committee to work on several recommendations of the anticipated climate action plan. With six subcommittees, Brandeis is poised to engage faculty, staff, and students across campus and launch efforts to implement recommendations set forth in the upcoming climate action plan.

“I’m really proud of how far we’ve come in the last five years,” said Mary Fischer, Brandeis’s manager of sustainability programs and an integral part of each of the school’s sustainability efforts. “We are now doing capital planning more intentionally than ever, and sustainability has become a default factor in those projects.”

And when one boiler replacement project can multiply into many more energy-saving projects, all of which add up to supporting Brandeis’s mission of social justice, the collective result is global warming reversed. What’s cooler than that?

Learn more about GreenerU’s lighting services and contact us today to save on utility bills and greenhouse gas emissions.