The race to zero: how higher education is tackling the challenges of carbon neutrality through building efficiency

Truly serious efforts to get to zero recognize that the obligation starts with lowering demand. Buildings alone use 42% of the nation’s energy. Without tackling excessive building energy use, campuses are only going to glance around the target. 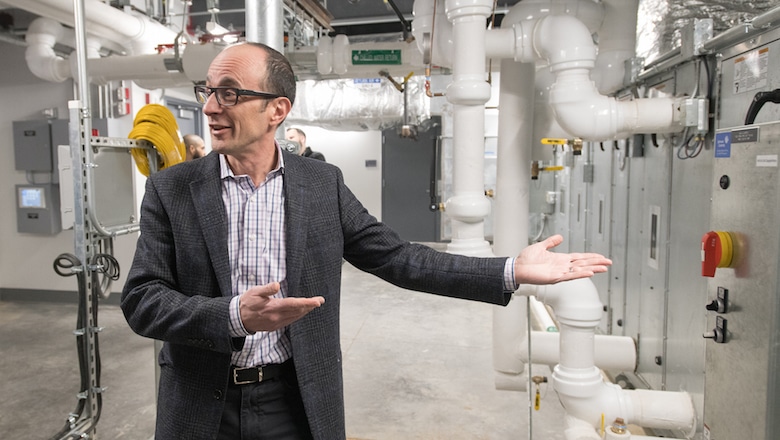 It’s an exciting time in higher education sustainability. A decade after an auspicious beginning to a new era of responsible climate stewardship, campuses are finally starting to see realistic paths to achieving carbon neutrality.

Most of them set to work toward that goal promptly, going for the easy wins converting from oil to natural gas (as natural gas prices plummeted), implementing recycling programs, and going after quick-payback energy projects. I’d call this phase “Energy and Sustainability 101,” where we were just embarking on the so-called low-hanging fruit.

At the time, I wondered what was going to happen ten years down the road when the easy wins have largely been achieved. Now, ten years later, some schools have moved on and seem to be content to pretend they never made those bold commitments. Many others are taking a hard look at the opportunities and challenges associated with continuing the drive toward carbon neutrality.

Truly serious efforts to get to zero recognize that the obligation starts with lowering demand. Buildings alone use 42% of the nation’s energy. Without tackling excessive building energy use, campuses are only going to glance around the target.

Deeper cuts to schools’ carbon budgets have proven extremely challenging. Many campuses have wrestled with either where to begin or what to tackle after the easy stuff has been done. Much like the process of eating an elephant, the answer is “one bite at a time”—except in the case of getting to zero, the job takes careful planning.

And there are significant hurdles. The economy zigzags. Endowments fluctuate. Presidents move on, creating a ripple of uncertainties. Legacies are upended and priorities shift.  Along the way lots of little decisions need to be made that can either move a school closer to its goal…or punt it.

One thing that remains a constant, however, is to use resources responsibly, however limited they may be. Even the wealthiest colleges have a duty to their students and trustees to make wise investments. And so while a range of circumstances may shift schools’ priorities, some basic tenets of good stewardship remain: don’t waste time, don’t waste money, don’t waste energy.

Thus, when we are talking about getting to zero, we are tasked with literally avoiding energy used when it can be replaced with or converted into something more efficient. This relies on the same three-prong strategy that every reasonable climate action plan has relied on in some form: reducing consumption, sourcing cleaner energy, and buying or creating carbon offsets.

Reducing consumption—or energy efficiency—doesn’t have the glitz and glamour of wind or solar, nor the easy write-off as carbon offsets. Reducing consumption can be a complex game of chess, with each move affecting future moves, and many variables changing the stakes at each juncture.

That said, chess is fun. Efficiency technology is rapidly improving to meet a growing market demand for building energy savings. Moreover, as more schools are increasingly discovering, the business of reducing consumption is most effective when they are strategic, interdisciplinary, and innovative.

As we look toward the next stages of reducing consumption, here are a few ways some institutions are diving into improving building efficiency.

The deep energy retrofit is an important component of campus carbon accounting. A deep energy retrofit is a “a whole-building analysis and construction process that achieves much larger energy cost savings—sometimes over 50% reduction—than those of conventional, simple retrofits and fundamentally enhances the building value” (Rocky Mountain Institute).

At its core, the deep energy retrofit starts from the needs a building serves and works backward up the energy chain—from end use to source—via an integrative design process to maximize efficiencies and get them to build on each other. The simplest example of how this works is that correcting building envelope deficiencies, reduces the demands on heating and cooling systems, enabling reductions in the size of equipment and ducts, pipes, and wires necessary to provide heating and cooling.

Deep energy retrofits typically require an external trigger, such as a major renovation, repurposing of a building or significant portion thereof, or needed replacement of major equipment or systems. Part of the deep energy retrofit process is to identify those triggers and plan for the retrofit well in advance.

So what are some specific technologies campuses are using within deep energy retrofits?

Ground-source heat pumps can cut energy bills by up to 65%, though exact savings depend on what kind of heating and cooling system is being replaced. Air-source heat pump energy savings vary a bit more, but use 40-70% less electricity than electric-resistance heating to operate, according to one source.

The commercialization of variable refrigerant flow (VRF) technology opens up a wide range of applications that would otherwise have been challenging for other heat-pump technologies, adding another layer of efficiency to heat pumps. VRF systems can serve multiple terminal units with one compressor system.

Much of the attractiveness of VRFs in a retrofit project derives from the small-diameter refrigerant pipes that serve as the heating/cooling distribution network. Installations are thus less intrusive and space-intensive than larger hot-water/chilled-water pipes or even larger ducts associated with conventional systems. VRF technology also provides the ability to move heat around a building—recovering heat from, say, a crowded conference room to heat a cold perimeter office, rather than rejecting the heat from the conference room (conventional cooling) and heating the perimeter zone separately.

There are a variety of incentives for installing heat-pump technologies as well. The federal government recently reinstated the investment tax credit for ground-source heat pumps, making third-party ownership of those assets more attractive. Other incentives vary from state to state. In Massachusetts, for example, the renewable portfolio standard was recently expanded to categorize heat-pump technologies as renewable heating sources , making heat pumps—both ground and air source—eligible for alternative energy certificates.

Heat recovery across campus utility systems is another growing trend. Most prominently, Stanford University recently overhauled their central utilities to take advantage of the significant overlap of heating and cooling needs on their campus. Rather than treating the hot- and chilled-water systems separately, and needing to optimize each, Stanford expanded the system boundary to encompass hot and chilled water in one system.

Optimizing that system looks very different from optimizing each subsystem independently. The significant overlap of heating and cooling needs enables the University to use a heat-recovery chiller to provide chilled water and reject the heat from the process into the campus hot-water system, effectively removing unwanted heat from one part of campus and transferring it to another where it is needed. This new system, combined with its investments in solar, has reduced Stanford’s campus emissions by 64% from peak levels.

These systems are effective even in colder climates. The University of Minnesota–Twin Cities has found opportunities to use heat-recovery chillers to provide low-temperature hot water for heating loads, using the chilled water system as a heat sink, effectively providing free cooling for wintertime cooling needs. Their new system has cut campus emissions in half.

Heat recovery within buildings has become common practice. Moving beyond simple recovery of heat from exhaust streams to put back into supply air, we are seeing more sophisticated approaches involving multiple energy streams, such as integrating preheated domestic hot water, heat rejection for process cooling, and preheated ventilated air into a system that recovers heat from exhaust air.

The role of data analytics

Building energy analytics have come a long way in recent years. The proliferation of data points in building automation systems combined with the continued growth of computing power have opened up a new frontier where machines can mine and analyze the vast amounts of data to identify anomalies and help find problems that may be wasting energy without anyone’s knowledge.

For example, in the pilot phase of Brown University’s ongoing commissioning (BOCx) program, Brown and GreenerU identified one issue, an error in the control programming for variable air volume (VAV) box dampers, that was leading to significant amounts of simultaneous heating and cooling. The problem had been in place for years—and, it turned out, was replicated across thousands of VAV boxes. Brown estimated that the relatively simple (and inexpensive: $1,000) program change to fix the error eliminated $36,000 in wasted energy annually.

Other features of modern data analytics include advanced sequences of operations for major mechanical systems (optimizing at the system, rather than equipment, level), integrated lighting and HVAC controls, treating and recycling air (thus reducing the need for outside air), and recovering condensate from cooling coils, to name a few.

Data analytics installations range significantly in cost savings, as the identification of issues may or may not necessarily lead to fixes, depending on the school. What analytics has been able to do, though, is consolidate literally thousands of data points into easily digestible information and offer facilities managers opportunities to weigh their options quickly and accurately.

The necessity of strategic planning

At the end of the day, technology is only part of the equation. Getting to zero requires strategic thinking about the longer term and the bigger picture—the drive for quick paybacks on projects has proved to be an unsustainable business model.

Carleton College in Northfield, Minnesota, has upended conventional thinking. More than a decade ago, they recognized that their utility needs required investments that were going to establish the framework for how the college was going to meet its utility needs for the next hundred years. Carleton then instituted a Utility Master Plan as a significant part of its 2011 climate action plan that resulted in a dramatic transformation of Carlton’s campus utilities and puts them on the path to carbon neutrality.

Like all large-scale projects, this took an enormous amount of careful and inclusive planning. They involved months- or years-long conversations with trustees, administrators, students, faculty, and staff to gather diverse perspectives and get buy-in.

This is probably the most exciting facet of energy-efficiency work today: what has been the nonstop game of facilities Whac-a-Mole for the beleaguered facilities director has become a process by which everyone is part of the solution. And that echoes what institutions of learning are about.

Getting to zero starts with eliminating waste—of time, of money, of energy. In an era of possibility, the chance to make deep reductions in energy use is an opportunity that shouldn’t be wasted either.

Thinking about your path to zero? GreenerU is always embarking on creative ways to tackle the problems of climate change and is ready to have a conversation with you about it. Contact us at 781-209-5670 or info@greeneru.com to get started.