Great ideas fail because they lack the strong foundation of diverse perspectives, troubleshooting, and idea testing that only conflict can unearth. 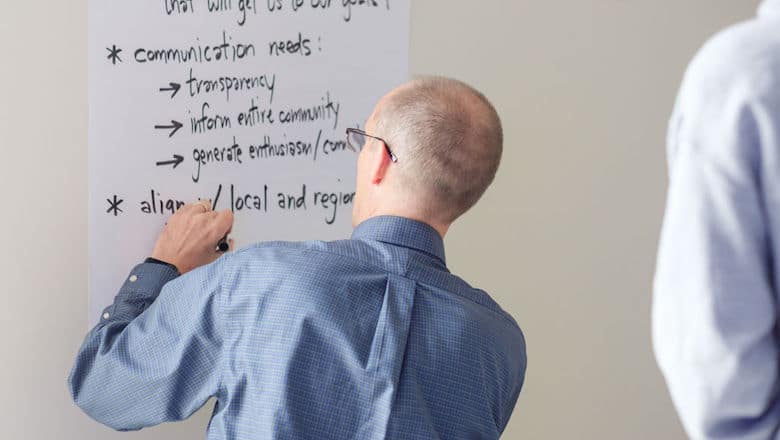 Do you ever daydream about coming up with a grand, new initiative where everyone agreed to the idea right out of the gate? Where all your colleagues came to the same conclusion about the best path moving forward and no one ever had conflict and everyone got along?

In your daydream, was your idea so amazing that you are carried out on your colleagues’ shoulders with them chanting your name? (Be honest.)

If that daydream was a reality, it would likely result in a Twilight Zone-like ending with a twist—you wake up and World War III is actually raging outside your window, or you’re trapped in a Turkish prison.

And here is why. Things would start out great, sure. But ultimately your original idea for an initiative lacks resiliency—it would fail after its first unforeseen barrier. It would fail because it lacks the strong foundation of diverse perspectives, troubleshooting, and idea testing that only conflict can unearth. You might have “won” out of the gate—but the memory of that win would fade fast when your initiative is found to be unoperational.

When making a decision that impacts the work of many in an organization, such as a strategic plan, it is common to consult with outside experts. Then one individual, often a president or top-ranking individual in an organization, decides the way they want to move forward. The reason why this approach is taken is largely due to the fear of engaging multiple stakeholders: fear of the work getting derailed, fear that an inclusive process takes up too much time, maybe even fear that the original idea will be altered beyond recognition.

But choosing not to engage  is a missed opportunity to make a decision that will stick, and there is a strong possibility that a decision will fall flat. Thus, gaining input from key stakeholders who are ultimately responsible for, most knowledgeable of, and affected by the final decision is essential for success.

Having a thoughtful approach for any decision-making process, whether it be developing strategic plans or deciding on efficiency standards on a college campus, is essential for several reasons.

1. You develop buy-in by bringing in your implementers in at the ground level.

Someone responsible for project timelines, budgets, and staff can feel undervalued when top-down standards are dropped on their lap without any consultation as to how this will impact their day-to-day work.

Staff often have routines that work well enough. Even if they want to support a top-down directive, not being involved in creating a new process will lead to them sliding back into old habits. Worse, managers won’t be willing to spend their social capital to champion new initiatives they don’t fully understand, and any drive for change will die.

2. You optimize your program by tapping into group knowledge.

Every individual has a bias or blind spot that could lead to an off-centered policy or standard. The value of an inclusive process in developing standards that are expected to be followed by an entire department is that one person’s blind spot could be another person’s area of expertise. In the end, you will create a document that reflects the reality of implementers’ day-to-day responsibilities.

Sometimes we forget that we hired our staff in the first place because of their expertise. Keep tapping into their knowledge that has become fine-tuned to your institution’s culture. Their feet-on-the-ground perspective will be essential to creating a strong path forward—plus, it gives you a pulse on how your organization actually runs.

3. You communicate your approach.

If you invest in a thoughtful process for making decisions, that process can be used to help communicate to both internal and external stakeholders how you are moving toward a systematic approach to energy efficiency, sustainability, or other goals. Clearly articulating the rationale for the final product ultimately smooths the way toward implementation.

The beauty of this approach is that when the going gets tough, you can always refer back to the work you did together. This will transform finger-pointing into problem-solving: from a blame game to “let’s work together to find a solution.”

For all the reasons why a group development process is so valuable is the same reason why people choose not to invest the time in doing it. Have you ever argued any of the following?

People have good reason to be fearful about an engagement approach, especially if they don’t have the framework and process to engage in an organized, thoughtful and constructive manner. If you have not invested in a thoughtful process, you are very likely just kicking a beehive in hopes it makes honey.

Yes, the process can feel messy and uncomfortable at times. No, you may not always agree with every perspective. Having a skilled facilitator to develop and lead a structured process can help demonstrate that disagreement reflects an unmet need, and that discord often reveals hidden opportunities. In the end, the process of gaining consensus leads to actionable plans that everyone can execute.

And the best part is knowing that this isn’t the Twilight Zone. This daydream can become a reality, where the time you put into the process turns into a product people feel invested in—and the results are still there when you wake up.

Feeling like it’s time to develop a process for a major institutional decision? We live and breathe process! Contact GreenerU’s change management team at 781-209-5670 or info@greeneru.com today.